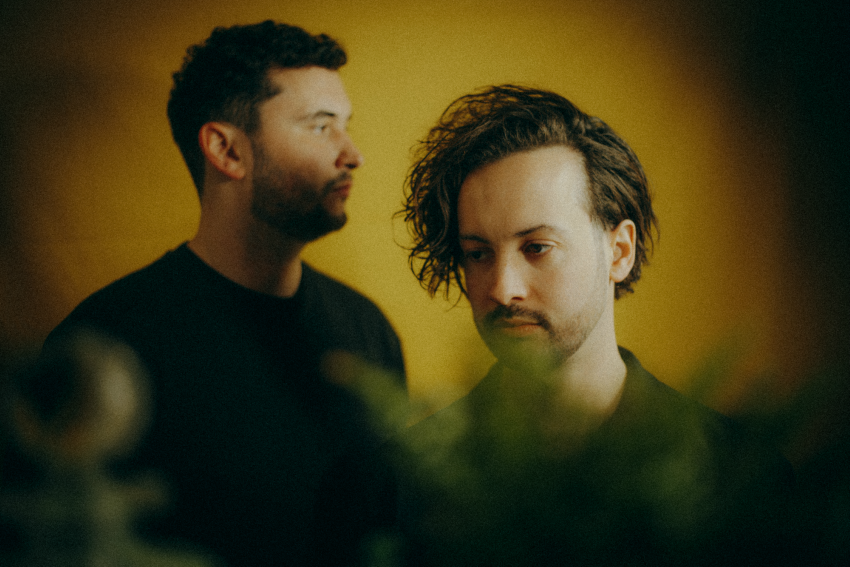 Bristol-based jangle-pop powerhouse duo Yard Arms return with their promisingly melancholic new single ‘Mantra’. The single was described by lyricist and frontman Villeneuve as a ‘triumphant love letter to the anxious’.

The track exudes the playful exuberance of Psychedelic Furs and INXS combined with the romantically morose lyricism ala Ben Gibbard or Paul Buchanan. Think John Hughes movies if they were soundtracked by Tim Burton. A pulsating stadium-sized emo-anthem to soundtrack your summertime.

See our exclusive interview with them below:


Looking back, what were some of your earliest entries into music appreciation? And music production?

I think for both of us, some of our earliest musical memories come from the television, whether it be Match of the Day highlight reel soundtracking, or the amount of time we spent glued to watching MTV2, Kerrang, Q, VH1, Kiss and The Box. Very importantly, the impact of certain artists’ imagery that still lasts with us now like The Prodigy, Marilyn Manson, Nirvana, Blink 182, 50 Cent, Weezer, Eminem, Red Hot Chill Peppers, Spice Girls, Sean Paul, the list goes on. Our appreciation for music production came a little later, I think it started to make more sense when we found ourselves being a lot more hands-on with the way our songs and sonics were being handled in the studio. Certainly for myself, I became more engaged with the importance of production in my late teens when I found myself listening to a lot of projects involving Daniel Lanois, Nigel Godrich, Brian Eno, Karl Hyde and Vince Clark. My eyes and ears became open to how you can create complete musical landscapes and environments for albums and carve out a ‘sound’ for artists rather than just a voiceless vehicle for radio or streaming.

We try not to stick to the same formula every time for the sake of creativity, I believe that comfort or routine doesn’t always provide the best results musically. Music does tend to be the starting point for us, followed by melodies and lyrics later. I will usually have some version of a song shape and colour to bring to Billy and we mould it into something more tangible in the rehearsal room, sometimes ideas will take half an hour to flesh out, sometimes they’ll take a year, there’s no real pattern for us and we like it that way.

Human connections, romance, grief, guilt, happiness, sadness, life, death. I find the art in all its manifestations to be inspiring, something as pure as a change in the skyline’s colour can trigger my emotions to create.

There’s a point in every artist’s career where they need to try and learn how to divide their brain into artist mode and business mode, it’s not pretty and it’s not cool, but it’s the truth. I don’t think we’re an artist with business ideas above our station, we’re not approaching this project with any secret plans to overhaul the way in which this beast functions. Every industry has parts that will be agreeable and disagreeable to all individuals within it, we can all choose to involve ourselves as much or as little as we want or think we need. There will always be the game changers in music who we have the utmost respect for, however, we are not trying to reinvent the wheel, we’re just happy to be here and have our creative freedom.

It’s such a chicken-egg situation for us, both feed into the other but they are such completely different beasts. Both are important for such different reasons. We pride ourselves on our live performances, this is definitely where we feel more of a powerful synergy with our fans, where our music has an instant impact that is so incredibly palpable.

We’ve had a lot of beautiful reactions to our music in the last couple of years in a variety of fashions so hard to pinpoint a most memorable. However, we played a show to Michael Eavis at the start of this year, and for him to shake our hands and compliment us on the performance was very special and dear to our hearts.

We’re so excited to kick off this campaign with our next single ‘Mantra’, that is out on May 8th. Following that up we have our isolation anthem coming out early June followed by a full EP at the end of June, more details to follow, eyes peeled. Lots of exciting live announcements in support of this record for the last quarter of 2020 too!

I’m coming up so you better get this party started.