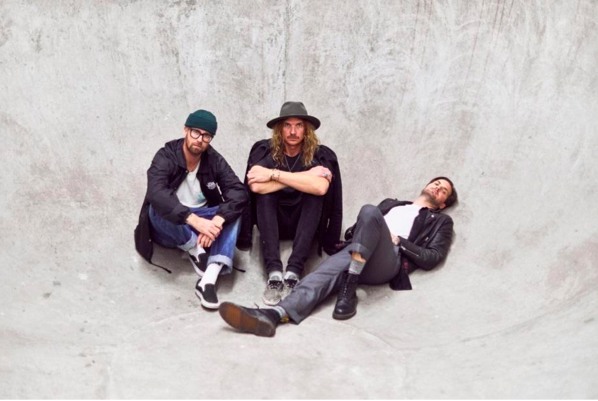 Sunset Sons made a huge impact with their 2016 debut album ‘Very Rarely Say Die’. Tipped in the BBC’s Sound Poll, the British/Australian band progressed to score airplay from Radio 1, Radio X and Absolute Radio. Meanwhile, live shows included a sold-out headline date at the O2 Shepherd’s Bush Empire as well as huge tours as guests to Imagine Dragons and Nothing But Thieves.

Now, Sunset Sons are poised to return in style with the release of their second album ‘Blood Rush Déjà Vu’ on November 1st. It’s a record which captures the magnetic energy of the band’s raucous live shows while evolving their sound. It’s a streamlined modern rock record which amplifies their power, full of strident anthems which are built to resonate as they echo out at festivals the world over.

“Our new single Superman is just a monster”, says drummer Jed Laidlaw. “It took a long time to get it right, from demo-ing it to finally nailing it with CJ and the boys in that room. I love the sentiment – it’s a beautiful song but it’s also a warning. And it’s the perfect album opener with a proper intro.”

Previously previewed by the tracks ‘Problems’ and ‘Say Hi’, the album’s first full single ‘Heroes’ was highlighted as Zane Lowe’s World First on Beats 1. Both unifying and emotive, it’s a statement of intent for the band’s bold new direction. “We’ve all been through relationships and other experiences that end sadly,” explains Laidlaw of the song’s lyrics. “But you can look back at the good times fondly. It’s nostalgic but also joyous.”

Like ‘Favourite Mistake’, both ‘One Of A Kind’ and ‘Take Control’ take darker twists on the band’s previously carefree outlook. And echoing the fiery intensity of the ‘90s alt-rock scene, ‘Alien’ caps the set with a ferocious race to the finish line.

Part of that reflective quality is inspired by how their adopted hometown Hossegor on the Atlantic coast of France changes between the seasons. As Laidlaw explains, “In the summertime the population quadruples and it’s just the happiest place. But like a lot of coastal towns, in wintertime, it’s dark, rainy and there’s a real sense of isolation.”

The story of the album’s creation started with the end of the band’s own first chapter.  Guitarist Robin Windram left to spend time with his young family, which forced a change in Sunset Sons’ dynamic. So instead of jamming new song ideas in a rehearsal space, the band – completed by Rory Williams (vocals/keys) and Pete Harper (bass) – started writing in Rory’s home studio, with each of them contributing guitar parts.

After six months, jokes Laidlaw, they had “forty songs which sounded like forty different bands.” But they identified the direction they wanted to take when they penned ‘The River’, the title track from last year’s EP. Their musical interests are diverse, but they shared a love of some essential traits: songs which are direct, rich with melody and that express a distinct meaning.

They began recording near Hossegor. Working again with producer Catherine Marks (Wolf Alice, Foals, The Amazons), and the sessions were complemented by wall-of-guitars provided by new touring member Henry Eastham, and long-term collaborator Robin Howl. “It made everything sound a lot more rocking,” remembers Laidlaw.“Sometimes it takes a while for a song to reveal itself when you play it back, but these jumped out straight away.”

Although the songs are immediately captivating, it’s also a headphone-friendly album full of rich detail: a range of vintage synths, sweet female backing harmonies, and emotive string arrangements. They credit Marks’ ability to identify a precise sound from a loosely defined description as being key to the album living up to its full potential.

As for that title? It’s a lyric which features in ‘Take Control’ and expresses a sense of familiarity that simultaneously carries a spark of excitement. It’s something that Laidlaw feels when he steps into his local beach bar, Coolin à la Plage: the site of many memorable nights out as well as the first-ever Sunset Sons show, a little over five years ago.
‘Blood Rush Déjà Vu’

Having played a sold-out underplay tour earlier this year, Sunset Sons will follow the album’s release with a UK indie store tour and headline tour in November 2019 and Europe headline tour in January 2020. The dates are: