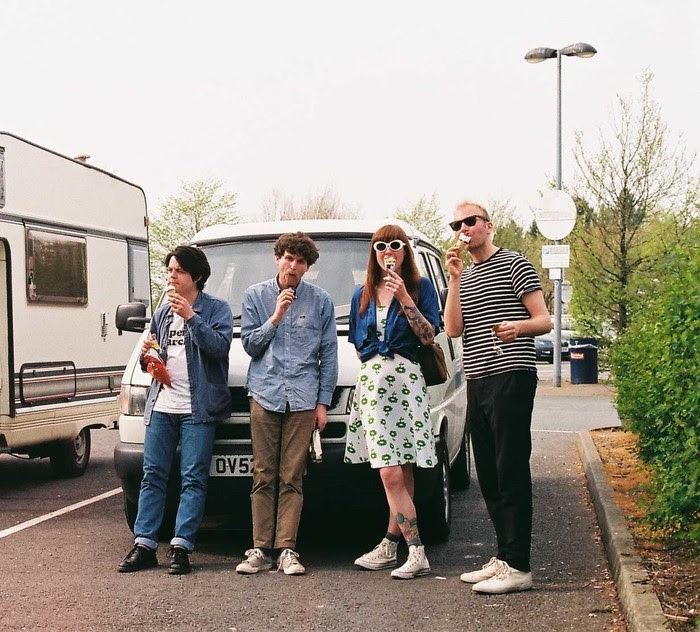 Getting in the mood for Halloween, Mr Ben and The Bens share a downright spooky video for “The Gravediggers Dance”, taken from the forthcoming album Who Knows Jenny Jones? which is out on 25 October via champions of Lancaster’s thriving music scene, Bingo Records. For The Rabbits posted a premiere, saying it “combines the gentle drift of Ultimate Painting and the tender harmonic flourish of Sweet Baboo.”

Accompanied by a new video from resident Bingo Records auter Tom Diffenthal, this latest song gives fans of the idiosyncratic Lancastrian songwriter, Ben Hall, further insight into the world that is created on the album – which is the tale of shrinking violet called Jenny from an area of Sheffield called Pitsmoor in the 1970s, who gets abducted by aliens and becomes the best disco dancer in town. Depicting an otherworldly creature tending to a desolate graveyard in some unspecified period during an apocalyptic future, the video considers how we look after places that are special to us, and finds beauty and creativity in time spent alone. The song is a slightly moodier direction for the band which creates an otherworldly atmosphere.

As Ben explains: “The song is a pivotal moment in the record’s narrative where the protagonist Jenny comes across the local gravedigger who claims to have been abducted by aliens. We wanted to reference that side to the story in the film but indirectly, so I created this character ‘The Beast’ who sort of acts as the caretaker of graveyards long after the human race has disappeared.”

The video for “The Gravedigger’s Dance” features Bingo Records’ Lloyd Bent as the beast. Tom Diffenthal was the director of photography and Zac Barfoot fed everybody with some very good pasta.

Mr Ben and The Bens have been touring and releasing records since 2017. In a short space of time, he has been embraced by BBC 6 Music’s Marc Riley and toured with Lancaster hometown DIY legends The Lovely Eggs as well as indie guitar masters The Wave Pictures and art-pop maestros British Sea Power. Being an integral part of the Bingo Records tight-knit community, they performed at the label’s First Anniversary package tour with label family Selection Box, Sun Drift and Dog Daisies.

For the new album, Ben played all the instruments himself (apart from drums) in his tiny bedroom in Sheffield. He branches away from his lo-fi acoustic folk roots to embrace more electronic territory, exploring a new sonic palette whilst still occupying the signature world of Mr Ben and The Bens. Ben has a canny knack of writing songs that reflect his ability to see the noteworthy in the everyday. His ear for melody shines through the songwriting, blending lo-fi experimental folk-pop with an emphasis on melody and lyricism, inspired artists including The Velvet Underground, Jeff Tweedy, Of Montreal and Cate le Bon.

The narrative for the record was created in collaboration with Lloyd Bent who runs Bingo Records. Ben and Lloyd moved to Pitsmoor in Sheffield, a neighborhood that occupies the top of a hill, which drops onto a big industrial area of Sheffield. The album tells a story of a young woman called Jenny who lives in Pitsmoor in the late 1970’s. It seems the whole town is against her as she fails her third job interview in a row. Her family have no interest in her life, opportunity is scarce and the world she lives in seems to be closing in. On the way to a dance that she hasn’t been invited to, she cuts through the graveyard to save some time. Through a series of events, she is abducted by aliens who impart some serious disco knowledge upon her. On her return to earth, the odds have changed and newly empowered with her dancing skills, she becomes the talk of the town for the night.

The artwork features an X-Files style photoshoot of an alien caught in a graveyard which incorporates a set and motif from the narrative of the album. As Ben elaborates; “Our drummer Zac donned a papier maché alien head I’d made in the kitchen, a metallic spandex suit and a leather tassled biker jacket.” As well as drummer Zac Barfoot, joining Ben for his live gigs (as The Bens) are Lauren Paige Dowling on bass and Tom Diffenthal on guitar and keyboards.

Who Knows Jenny Jones is a fully realized and extraordinary piece of work, full of imagination and catchy hooks, delving in both social realism and fantasy. As Ben says, “It’s funny, dark and surreal but I like how the story kind of represents the exciting, incredible things new movements in subculture can do to young people living in provincial areas. I bet listening to disco music for the first time in industrial Sheffield was like hearing music from aliens!”