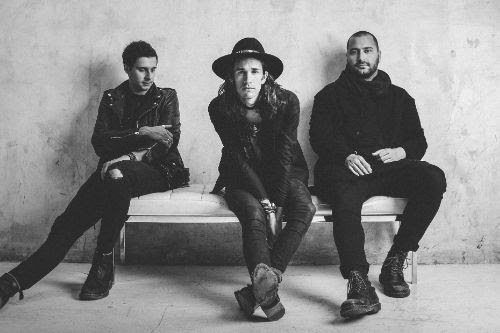 Following the release of their debut album Thought, Flesh and Bone in March, Anglo-American trio Charming Liars are continuing their breakout year in style. Along with the recent release of their EP of reworked and reimagined songs Bare Bones, they’ve just revealed an acoustic video for the graceful and poignant track ‘Insomnia’ ahead of their upcoming UK tour dates. It’s the follow up to their US hit ‘Something Dark’.

The band kick off with a performance at The Borderline in London on Thursday 22nd August supporting Night Riots, then have two headline shows in Coventry and Southampton before joining The Faim for a string of UK shows. They’ll be delivering their mesmerising brand of rock to hordes of new faces before they jet back overseas to support Angels & Airwaves all over the USA.

Charming Liars evolution began in London’s West End when Karnig Manoukian and Mike Kruger were still in their teens. They both came from homes with wide ranging and eclectic musical tastes, and that early exposure informed their approach to making music.  They started writing and playing together in a series of bands and honed their musicianship with several tours up and down the UK.

In 2013 they decided to make the move to Los Angeles, in part spurred on by an encouraging social media message from songwriter and producer John Feldmann (Panic! at the Disco, Plain White T’s, 5 Seconds of Summer, Blink-182) who told them to look him up for a songwriting session if they were ever in town. They connected with singer Kiliyan Maguire through a mutual friend while he was attending The Musicians Institute in Hollywood and soon realised that they had an organic musical chemistry that would lead to interesting possibilities. From this Charming Liars was born.

2016 saw their debut single ‘Soul’ reach number 40 on the US Alternative Radio Charts and since then follow up singles ‘Something Dark’, ‘Like A Drug’ and ‘Insomnia’ have all been US Alternative Radio hits. They have built a worldwide following with constant touring, playing across the entire U.S. as well as Mexico, South America, the UK and Europe, including recent stints with Tokio Hotel and Dorothy.