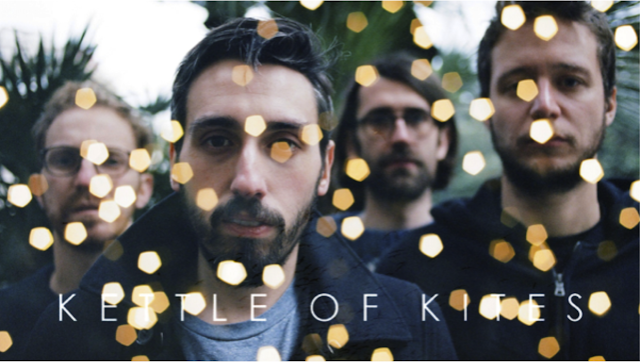 KETTLE OF KITES have revealed a new single: ‘Orchid’, a haunting new cut that offers reflects on the blurring of fiction and reality as Earth stands on the precipice of environmental disaster.

As with the rest of upcoming studio album ‘Arrows’, the latest single from the post-rock collective sources its inspiration from the revolutionary works of science fiction author Isaac Asimov. Chiming with the recent Extinction Rebellion and climate change protests that have taken place across Europe, Asimov’s novels often dwelled on the implications of man-made ecological disaster and the lyrics of ‘Orchid’ find Kettle of Kites inflecting his sentiments to provide timely reflection on the urgent need for environmental action.

“In much of the science fiction works of Isaac Asimov the creation of a parallel universe set in the future serves as a tool to explore forward thinking ideas but also to focus our attention on our present. ‘Orchid’ is set between present and possible future, reality and fiction, and is the song from ‘Arrows’ which is closest to our own current reality and is set in the moment when humanity is forced to abandon earth, now polluted and uninhabitable because of radioactive substances.”

Cruising the astral planes between REM, Idlewild and Talk Talk, ‘Orchid’ is the latest sonically ambitious and majestically progressive cut from Kettle of Kites. With a slow-burning and wistful atmospherics that build to a brooding, apocalyptic crescendo, ‘Orchid’ animates a dystopian world once only envisioned in the nightmares of Asimov with lucid effect. As Earth stands on the precipice of facing such a reality, ‘Orchid’ acts as a stark reminder of our fragile planet’s mortality and of the accountability humanity must take to preserve its future.

‘Orchid’ is just the latest in a string of singles including ‘Weathervane’ and ‘Oliver’ that lead to much anticipated new album ‘Arrows’ this Autumn. A science fiction concept album that traverses the listener through space, time and beyond, the record features 9 tracks of stimulating post-rock each inspired by the groundbreaking ideas of Isaac Asimov.

At a time when isolationism and ideological inward-looking, seem to be gripping the western world with greater effect every day, Kettle of Kites are a band unafraid to break the curve. With its constituent members hailing from Scotland, England, Belgium and Italy, Kettle of Kites gaze far beyond the borders of Earth and transfix upon the wonders of the universe and its limitless possibilities. Arriving in 2019 like a pan-European, sci-fi space rock programme, the four piece will deliver their new album this Autumn: ‘Arrows’, an innovative concept record inspired by the works of science-fiction pioneer: Isaac Asimov.

Straddling the astral planes between Radiohead, Talk Talk and Green-era REM, Kettle of Kites are a sci-fi inspired rock band currently based in Italy.  Releasing ‘Loan’ in 2015, the band’s debut album arrived as very much the solo effort of Scottish songwriter and former member of orchestral indie-pop outfit Admiral Fallow: Tom Stearn. Recorded unceremoniously in a basement in Italy, the  release was finessed half way across the world at the famous A Pocket Full Of Stones studio in Australia.

Returning to the project in 2019 with an expanded line up and a brave new vision for the band’s future, Stearn enlisted talents from across Europe in the form of Genoa’s Pietro Martinelli (bass), Brussels-based Marco Giongrandi (guitar) and London-based drummer Riccardo Chiaberta, to map out the musical schematics of upcoming concept album: ‘Arrows’. Combining a wealth of experiences from music scenes across Europe, on ‘Arrows’ the new-look line up adeptly illustrate the vividly visionary worlds and endlessly imaginative idiosyncrasies of acclaimed Science Fiction author Isaac Asimov. Harnessing supernova crescendos to spacial melodies with artful effect, ‘Arrows’ sees Kettle of Kites charting their true potential with nine intrepidly arranged and intergalactically influenced compositions that reach for the stars.