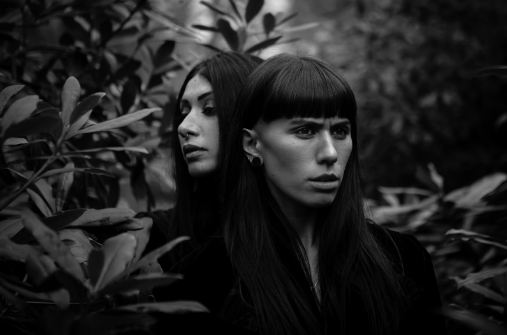 Alternative dream-pop duo PINERO|SERENE gears up to release their debut EP, Dark Matter on the 12th of July. Ahead of that, they have shared their second single, ‘Dead Flowers’ premiered by TMRW Magazine. The single was officially released last Friday, 28th of June.

Based in the artistic hub of London’s East End, PINERO|SERENE create dark, atmospheric soundscapes, through a unique and paralleled songwriting collaboration, that personifies emotional experience. Neeq moved to London from Berkshire to pursue a passion for photography and music. She dabbled in spoken word poetry, fascinated by the potency of words, and has since honed her skills to the development of abstract songwriting and production skills. Cheryl began playing bass at age thirteen, and toured around Germany and The Netherlands in her early twenties, eventually settling in London.

“‘Dead Flowers’ is the last in the chain of a four-track EP, which takes you on a journey through personal evolution. It’s about facing the fear of letting go, to make space for a new dimension of existence and perception.” – PINERO|SERENE on their latest single.

The music video for their single ‘Take My Soul’ was also premiered last month, on the 14th, with positive responses so far. You can watch it below