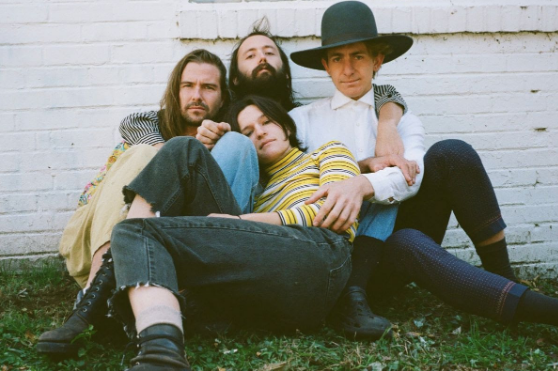 Big Thief have shared ‘Cattails’, the second new song off their forthcoming album U.F.O.F. This follows the woozily gorgeous first song, ‘UFOF’ (which Pitchfork named “Best New Track”) and gives listeners a glimpse into the breadth of moods contained within this new collection. ‘Cattails’ begins as a simple song, a finger-picked accompaniment from Adrianne Lenker and propulsive drums from James Krivchenia. As the song progresses, a glorious hum begins to take hold underneath, with drones and twinkling piano joining the throng, as the song seems to become lighter than air and take flight. Lenker says this of ‘Cattails’:

“Cattails came about while we were at the studio in Washington in the pine forest. Writing it was just one of those electric multicolored waves of connectivity just sweeping through my body. I stayed up late finishing the song and the next morning was stomping around playing it over and over again. We thought why not just record it, so James sat at the drums and we practiced and by the time we’d finished practicing, Dom Monks – our engineer – had already sneakily set up mics and recorded it. It was beautiful that he’d captured it right away because when James and I were playing it felt like a little portal in the fabric had opened and we were just flying. Listening back to it makes me cry sometimes.”

U.F.O.F., F standing for ‘Friend’, is the third record by Big Thief, set to be released on May 3rd. Adrianne Lenker (guitar, vocals), Buck Meek (guitar), Max Oleartchik (bass), and James Krivchenia (drums) have spent the last 4 years on an incessant world tour, winning the devotion of an enthusiastic and rapidly expanding audience.

U.F.O.F. was recorded in rural western Washington at Bear Creek Studios. In a large cabin-like room, the band set up their gear to track live with engineer Dom Monks and producer Andrew Sarlo, who was also behind their first two back-to-back releases, Masterpiece (2016) and Capacity (2017).

“Making friends with the unknown… All my songs are about this,” says Lenker; “If the nature of life is change and impermanence, I’d rather be uncomfortably awake in that truth than lost in denial.”

U.F.O.F. is available for pre-order on LP, CD, and digital. Limited translucent orange vinyl is available via the Big Thief store and 4AD store + your local indie retailer. Limited forest green vinyl will be available through Vinyl Me Please.