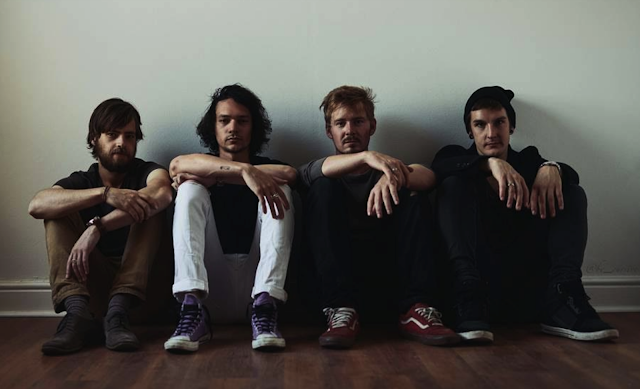 Mobbing Bali are a four-piece Indie act from Cape Town, South Africa. They recently released the video for their single ‘Coffee,’ the inspiration of which comes from a 2015 woman’s magazine article titled “5 Men You Will Date in Your Lifetime.” Shot on location at a sprawling farm lodge in South Africa’s Cape Winelands, Director Dylan Vermaak explains: “The narrative follows a women going on multiple dates with vastly different men, with the goal to find her next boyfriend. The vixen loves the attention from all the guys and decides to play them. The guys soon uncover her devious plan and unite to form a band singing her a song they wrote for her called ‘Coffee.'”
Mobbing Bali is Warren Driscoll (lead vocals/ rhythm) Matt Weir (Bass) Jared Murphy (lead guitar) and Kenric Potter (Drums). Their debut EP Credo – a blend of classical, Latin and pop elements, was received with glowing reviews.
We chatted to vocalist Warren about influences, songwriting and what’s on his playlist….
Set the tone for us. How would you describe your sound?
We call ourselves “progressive indie.” When the band formed we had direct influence from indie bands such as Two Door Cinema Club, The Wombats, Phoenix, The Temper Trap etc, but over the years we’ve incorporated other influences from the different artists we listen to as individuals. Some of these artists range from Bach (baroque music) to heavier rock bands like The Dead Weather, Raconteurs, Muse etc. As a result our songs come out different every time we write, hence the term “progressive indie.”
Whats on your current playlist?
At the moment I’m listening to:
Ólafur Armalds- For Now I am Winter
Jon Hopkins – Immunity
The Darkness
Nothing But Thieves
Stabat mater (pergolesi)
To name a few, I can’t speak for the rest of the band, haha.
Take us through your songwriting process. Are there any particular steps you take when putting music together?
Usually I would come to the guys with an idea of a song, I call it the skeleton of the song, so that means chord progressions and melody are usually sorted out. When we meet up we all add what we can to it, everyone is in charge of their own department so Matt plays bass best there for he writes the bass riffs and if we don’t agree on something we workshop it. I call this process fleshing the song…. Even after we’ve finished the song it will probably change as we play it at different gigs, and when we walk into studio it is guaranteed to change again. Once it’s recording that’s what our audience will come to know the song as. We will probably still play it different in some way every time.
What gets your creative juices flowing?
Once again I can only speak as one quarter of the band. Influences/inspiration pop up in different shapes and sizes and when you least expect it. I’ve got into the habit of leaving my voice recorder on when I drive so I sing whatever melodies come to mind. When I get home or have time I’ll go to these melodies and add chord progressions and harmony to them. I find working with a chord progression first restricts or limits the process.
David Bowie is quoted as saying “It makes me so angry that people concentrate on lyrics. It implies there’s no message in the music itself.” What are your thoughts on this statement? Music or lyrics?
While lyrics are important in certain genres particularly hip-hop, I’d agree with David Bowie’s statement. Music is all about tension and release, how certain harmonies make you feel uncomfortable until they resolve, film scores are a perfect example of this. In baroque and classic music it is all over the place as well. However in modern music we seem to be losing this art form. the lyrics and beat mean the most now, so I can relate to why Bowie felt that way.
Tell us about the chemistry you have with your fans on stage.
It depends on where we play, we have a few loyal fans which we really appreciate, however I believe we are still building a name and finding our fan base, so chemistry purely depends on the gig and how the crowd receives us.
What is the most memorable response you have had to your music?
For now we are very proud of our Credo EP it was received very well. But I think we want to aim for bigger things rather than focus on what’s happened
If you had to choose between never playing live again, or never being able to release music again… Which would you go for, and why?
I’m sure the band would all have a different opinion but I LOVE performance so I’d play live shows till kingdom come. I love being able to be creative and release new things but the adrenaline of live performance is addictive.
Breakdown the news for us: what can we expect from you in the near future?
We have an EP in the mix, much shorter than the Credo EP and we are recording the first single. Hopefully we will be playing more festivals.