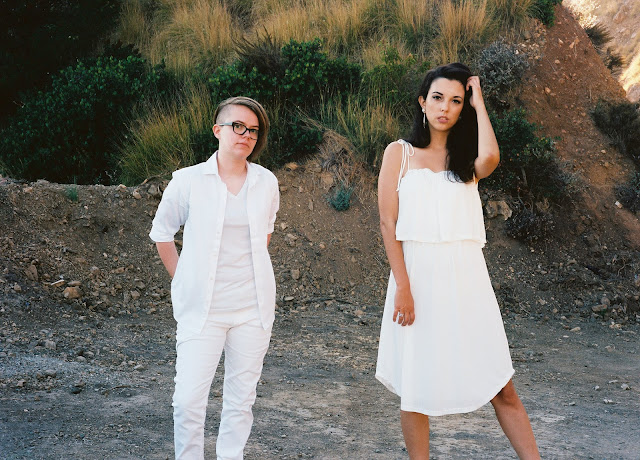 Since releasing second single from the final EP of 2017 and a Christmas cover, Staircase Spirits, fearlessly led by Anna Acosta (vocals, acoustic guitar) and Eva Friedman (drums), finally present Love Stories EP. As the third EP in their 2017 Stories collection, this pop/rock duo have shattered constraints of the genre and created a beautiful niche of their own. They will be performing in Flagstaff, Arizona at The Hive tonight to ring in the EP, along with locals Wade Adkai and Turtleneck Tuesday.
Today, Love Stories evokes a wide range of deep emotions and continues their autobiographical narrative that Acosta and Friedman pride themselves on. After releasing the EP’s second single “California Winter” via Substream Magazine, Love Stories is available on Bandcamp and iTunes, and “California Winter” is available for streaming on Spotify, Bandcamp and Soundcloud.
The female duo, recorded with Jonas Vece of band Safely, Staircase Spirits members Acosta and Friedman are actively involved in the empathetic movement the pop-rock and pop-punk music scene has recently encompassed. As both queer and female musicians, these two talents aim (and succeed) for their music to lead in inspiration.
Vocalist Anna Acosta on the band’s lyrics:
“Our hope as a band is that we can continue to grow and to challenge ourselves and each other to be better than we were when we met – and to reach people beyond ourselves at the same time. Once we put the songs out there, they stop belonging to us. Our hope is that people can get whatever it is they need from each song when they listen to it – whatever that might be. If you can make a difference for even one person, then all the struggles were worth it.”
Lighting a flame to the remnants of Acosta’s previous abusive relationship, the brand new single “California Winter” features thick guitar and strong vocals that come beautifully unhinged as the song goes on. The single comes as their most recent success, following their contribution to the Defend Planned Parenthood compilation. While the moving lyrics behind each tune cranked out, even the story behind the band nam proves beyond worthy of any listener. “Staircase Spirits” is roughly derived from the french term “L’esprit de l’escalier”. The original term literally translates to the spirit of the staircase, or staircase wit, and refers to that predicament when a person thinks of the perfect thing to say when it’s too late to say it – which is the short version of the story behind every song I’ve ever written”, says Acosta.

Listen to Love Stories below.