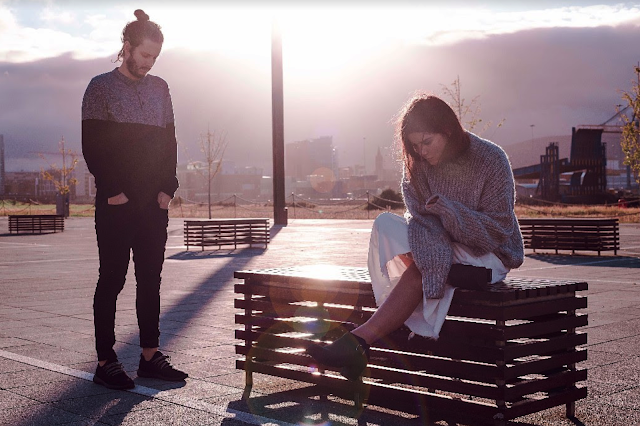 The video features New Portals’ Ruth Aicken dancing among a kaleidoscopic wave of visuals. The song celebrates the very real option of enjoying sobriety, which finds Ruth singing, “I like to party when we’re sober” in her hypnotic hushed coo. The song is awash with beautiful acoustic guitar intertwined with slow-jam electronics.

Regarding the new single New Portals say, “‘Sober’ is about your ‘desert island friend’, the friend where you would be perfectly entertained if you were stuck on a desert island with them. No need for external help to have fun, ‘Sober’ is a celebration of this type of bond that we all need.”

‘Sober’ is taken from the recently released Golden Hour EP, which received great support from the likes of Vogue, Clash, Line Of Best Fit and many more. The EP also features the moving ballad ‘Chasing Shade’, the lush lounging indie of ‘Do It Right’ and the mellow R&B tinged ‘Locked Down’.

The Golden Hour EP follows the band’s debut EP Stereo released earlier this year to more great praise from the likes of the Metro, The Guardian, Dork Magazine, Missguided, Pretty 52, 1883, Galore, Pop Dust and many more.

New Portals have also received strong support from BBC Radio 1, with Phil Taggart and Huw Stephens particularly big champions of the band at the station. They’ve been featured in a host of high profile Spotify playlists and receive regular in-store rotation at a number of leading UK high street brands too. The band have also been developing increasing transatlantic appeal, having completed their first US tour last year and playing a number of shows at SXSW 2017.

As 2018 fast approaches, New Portals are continuing to prove they are formidable new force on the electronic indie pop landscape.