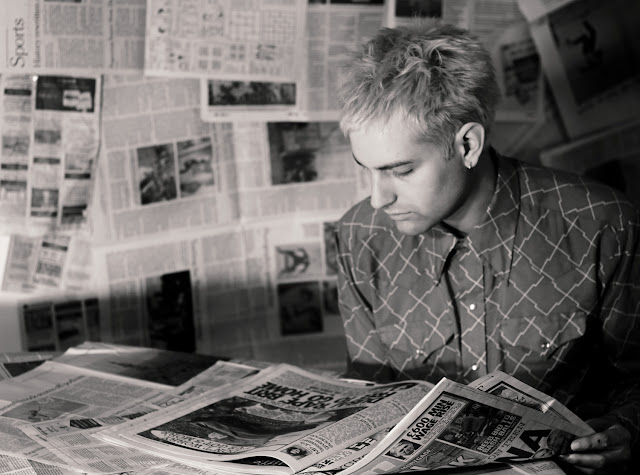 Fresh from touring the US while fronting seminal post-punk group Gang of Four, prolific songwriter John Sterry, aka Billionaire, will release his new EP, Cheap Credit!, on 31st March.
The self-produced EP was mastered at YiaYia Studios is a collection of 5 original songs that mark a shift towards progressive beats and richer production, while still preserving Billionaire’s uniquely skewed social commentary and sharp sense of satire. Although sonically inspired by a range of leftfield musicians such as Metronomy, Can, Talking Heads, Jonathan Richman, and Rexy, on Cheap Credit! it is another of Billionaire’s heroes, Tom Waits, whose influence shines through in the witty, sardonic songwriting.
Cheap Credit! builds on Billionaire’s previous offering Fine Minds by developing rich, interesting musical textures – from the major-key synth lines of “Reasons To Be Fearful” to the dark backbeat of “World Loves A Trier” – and further showcases Sterry as a compelling, idiosyncratic voice on the contemporary British scene, whose work is full of humour, anger and pathos.
With a string of tour dates lined up in support of the EP’s release in March, Billionaire is ready to share his wry, cutting brand of lo-fi electronica with audiences across the UK and beyond.
Billionaire Upcoming Shows:
29th March – Discovery 2 Showcase, 299 The Venue, London
29th April – City Sound Project @ Westgate Towers, Canterbury
27th May – Unfest, Tunbridge Wells, Forum Main Stage
15th July – Zooquarium Festival, Hasting Pier
Watch the video for “Reasons to be Fearful” below:

One reply on “Billionaire To Release New EP, Cheap Credit!, Through Blue Mary”

We're a group of volunteers and opening a new scheme in our community. Your web site offered us with valuable info to work on. You've done an impressive job and our entire community will be thankful to you. capital one card login in