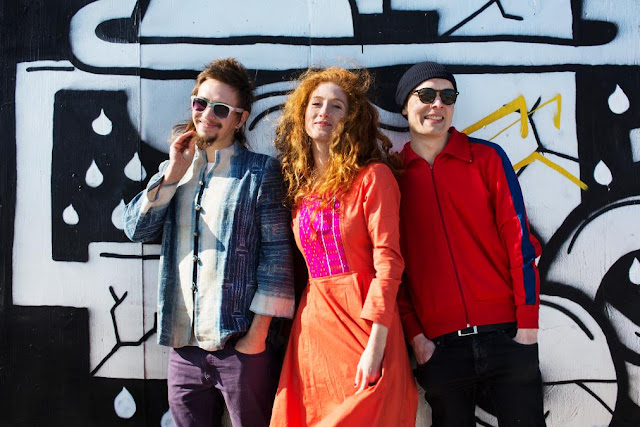 We caught up with Helsinki based Elifantree who deliver an experimental musical trip on the border between pop and improvised music. Vocalist Anni Elif Egecioglu, saxophonist Pauli Lyytinen and drummer Olavi Louhivuori make songs with a razor sharp blend of social criticism, surrealism and unique sounds dipping into ambient and electroacoustic textures that create a sound much larger and wider than the sum of their parts.

On their third and latest full-length album Elifantree has developed an increasingly danceable edge to their sound that reveals the band’s original jazz background only upon close inspection.

Hi there, how are you and what are you up to today?
Hi! I´m doing great. I´ve been having a week off in the Finnish woods after a very intensive spring.

To those not familiar with you, how would you describe your sound?
The foundation of Elifantree´s sound is based on vocals, tenor saxophone (with effect pedals), synths and drums. Recently we also have expanded our sound with EWI (electronic wind instrument), sampler, piano and drum machine.

It takes quite many words to describe Elifantree´s music since it´s not bound to any particular genre. It could be called experimental pop with plenty of freedom. One could also hear elements from electronic, ambient, jazz, classical and rock music. Or simply, as someone put it in a review: “Elifantree´s music is like a Charlie Chaplin movie.”

What are the 5 albums that have influenced you the most?
Jim O´Rourke: Eureca

Which other artists are you into at the moment and why?
Sergey Kuryokhin: A mastermind and USSR´s leading experimental pop artist.

Prince: His early albums are mind blowing with all its experimental boldness.

M.I.A.: She’s a genius. Have so much respect for her strong statements on the matters of human rights.

Are there any key pieces of equipment that you are using to define your sound?
Tenor saxophone with effect pedals, EWI (electronic wind instrument).

What would you say some of the challenges artists face today in the music industry?
Every year it gets more difficult to book gigs with reasonable deals and it seems like even the most established venues are running out of money. The western world is richer than ever and yet there’s less and less money for cultural activities. It’s interesting how the neoliberalism works…

Where do you gather songwriting inspiration?
Basically from whatever. Nature, human behavior, all kind of art forms and traveling.

Take us through your songwriting process. Are there any particular steps you take when put music together?
Most of the time me (saxophonist) or Anni Elif (vocalist) come with a basic idea. Then we jam with it and try out different approaches until we find a form. After that anything can happen. For writing lyrics Anni Elif gets inspiration from daily life, films, articles and poetry.

What’s the best gig you have ever done and why?
It´s a really tricky question since there have been so many special concerts with Elifantree during the last nine years. One concert that came to my mind was a concert in Paris just three days after the terror attacks in November 2016. It was a very strong experience and felt important. Also a concert in Rabat, Morocco a few years ago was very special. It seemed it gave courage and enlightenment to the people there. These kind of things make you wanna continue.

And the worst?
Probably it was one of Elifantree´s first gigs many years ago when the sound failed completely. At that time we didn’t have a sound engineer of our own and the co-operation with the local sound guy wasn’t very successful. Everything was compressed to the max and there was no monitoring. Learned a lot from that though.

If you weren’t a musician what would you be?
I´d probably be a snowboarder or a linguist.

If you could perform alongside any other band or artist, who would it be?
There´s one above all: Hermeto Pascoal, a Brazilian mastermind and virtuoso that has inspired me over 20 years.

Do you have any information regarding upcoming releases, projects or gigs in the pipeline that you would like to tell us about?
With Elifantree we are working on our fourth album which is to be released in autumn 2017. We’ll release a few singles on the way. The first single “Inexhaustible” will be released properly in the end of this summer. There will be a bunch of gigs in Europe in the autumn 2016 and me and Anni Elif are gonna spend the whole November in a residence in the heart of Paris writing new music for Elifantree.
Stay tuned on Elifantree’s Facebook (facebook.com/elifantree), Instagram (instagram.com/elifantree) and homepage (www.elifantree.com)