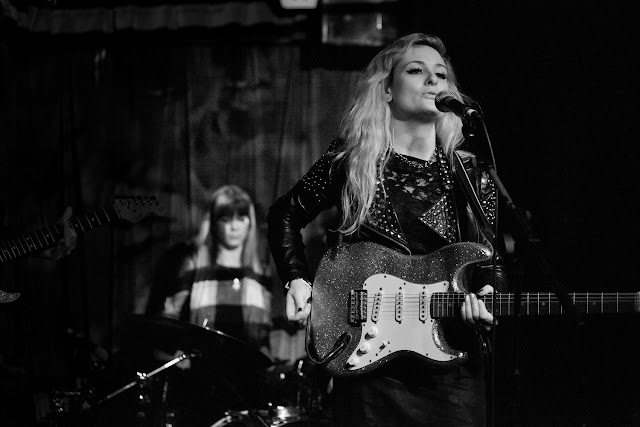 Fusing an avant-garde mix of indie and electro, Lara’s music is guitar-driven, synth-inspired and brimming with colourful layers of alt-pop. Lara started out writing punk and soul tunes on her guitar – but all-night raves in her teens led to a love of dance music and experimenting with samples. In recent years, having caught the eye of BBC and international DJs, Lara’s music has so far received extensive airplay on radio stations in the UK and across the world. She’s performed at some of Europe and America’s largest live venues and music festivals – and with three Glastonbury performances already under her belt, she’s getting excited to play Glasto 2016. Lara can reveal that she’s currently working with Tom Findlay of Groove Armada – it’s a dark techno track that she wrote in her tour bus bunk – they loved the tune and a collaboration was born. Her latest single co-produced by legendary producer Youth (Primal Scream, The Verve, The Orb), “Change the World” is out now.
We caught up with Lara Smiles ahead of her performance at Glastonbury this weekend!

Hi Laura, how are you and what are you up to today?
Hi, I’m good thanks! After this interview i’ll be working on some new songs for my debut album.

To those not familiar with you, how would you describe your sound?
Fusing an avant-garde mix of indie and electro, my music is guitar-driven, synth-inspired and brimming with colourful layers of alt-pop.

What are the 5 most influential albums that have influenced you the most?
Michael Jackson – Bad
Lauren Hill – Miseducation
Paul Simon – Graceland
The Strokes – Is This It
Green Day – Dookie

Which other artists are you into at the moment and why?
I’m listening to LCD Soundsystem a lot at the moment to get some inspiration. I love their experimental sound mixing punk and dance.

I’m also listening to Savages at the moment, I love their new and last album. The guitarists sound is amazing. I love the eerie sound of it, she has her own style. And I love the poetic and beautiful voice of Jehnny Beth.

Are there any key pieces of equipment that you are using to define your sound?
I’m constantly trying out new sounds but at the moment I’m using a fuzz face and boss delay pedal for my guitar. I’ve just bought a Micro Pod guitar pedal today and it looks like i’m addicted already!

What would you say some of the challenges artists face today in the music industry?
The main thing I would say is how difficult it is to make money from your own music. If you have a gig you usually have to pay to play especially in London and this can really get you down!
It’s great that there’s so much music out with the internet etc but it also means it’s really hard to get your music heard.

Where do you gather songwriting inspiration?
I get inspired by everyday life, I like to put myself in other peoples shoes when I write which helps me form a story or idea to write about. I get a lot of inspiration when traveling on public transport, it helps keep my thoughts and imagination flowing.

Take us through your songwriting process. Are there any particular steps you take when put music together?
There are a few ways that I write. I mainly like to start with a cool drum sample from logic and then I put a guitar idea on top. Sometimes I go straight in with a vocal melody on top of a beat and then write the guitar or other synths on top of that.
I have a few poems lying around and sometimes I get lucky when one fits with a melody, its a great feeling when it just fits!

What’s the best gig you have ever done and why?
I also sing and tour with The Australian Pink Floyd Show and we did a gig in Canada at The Bell Centre about 4 years ago. I sung Great Gig In The Sky for the first time and there were around 10,000 people in the arena, it was an amazing experience i’ll never forget!

And the worst?
Last week! We did a gig and it was so dark on stage I couldn’t see what I was playing and we left some equipment at home by mistake so the sound wasn’t right.

If you weren’t a musician what would you be?
I love travelling so I would hope to think I’d be touring with a band somehow, maybe tour managing or assisting artists.

Do you have any particular gigs or festivals that you dream about playing?
I dream of playing on one of the bigger stages at Glastonbury. I love the vibe of festivals. And I’ve always wanted to play at The Brixton Academy, love that venue!

If you could perform alongside any other band or artist, who would it be?
Paul Mcartney, Massive Attack, MGMT, Hot Chip , Primal Scream, I could go on!

Do you have any information regarding upcoming releases, projects or gigs in the pipeline that you would like to tell us about?
I have a new single coming out in August.

I’m playing at Glastonbury on the West Holts Stage Bar on Saturday at 9:30pm and Sunday at 6:15pm.