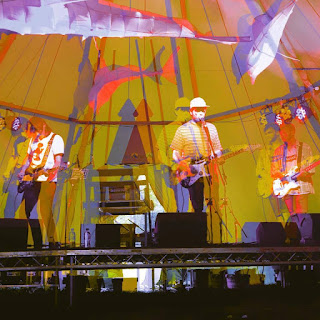 The Boy I Used to Be create sun drenched, joyous garage pop meets psych folk in the vein of Unknown Mortal Orchestra, Kurt Vile and earlier Cloud Nothings. It’s full on lo-fi fun by the now trio that started as a one man bedroom project only in late 2013 and has already seen two EP releases on Pie & Vinyl Records and a release on a compilation on Strong Island Recordings.

Hi there, how are you and what are you up to today?
Hey, I just saw UMO last night so I am pretty good. I’ve seen almost every episode of Dinner Date and Storage Hunters so I guess I’m gonna get recording some demos. Hopefully there won’t be too many influences of awkward dates and buying old gym equipment coming through.

I once described it as Jamelia meets Beach Boys meets Nirvana, with a bit of Beck, but it’s a bit gloomier than that. We make what everyone would probably call indie but it’s made in a lo-fi not knowing way.

What are the 5 albums and artists that have influenced you the most?

That’s tough but there’s a few albums I always go back to time and time again.
Someone Still Loves You Boris Yeltsin – Broom

What other artists do you really like at the moment and why?

I really love the newest Young Fathers album, it’s so good, and the new Maccabees album. I’m waiting on the new Kurt Vile album and been going back to listen to Teenage Fanclub and Warpaint alot recently. Really into Alex Burey and Hooten Tennis Club and lots of stuff, I tend to either obsess over one album for ages or listen to loads of different stuff at one time, never anything in moderation. Max is loving the new Foals album and the new FKA Twigs EP because he’s cooler than me and Callum loves the Spotify discover playlists whilst decorating our house. Might send Spotify an email to see if they’ll put some Marilyn Manson tracks in there and I can watch his life spiral into ridiculousness.

What are some of the key pieces of gear you use to write your tracks?
I just have a Squier Strat, my first guitar that has taken so many beatings that I really like the tone. We have a smashed Macbook that our friend Ryan has lent us, so we record our songs onto through a M-Audio interface and the vocals with a Shure PG-48. It’s not professional, but it’s what we have to hand and it works. We buy lottery tickets every week so we can pop along to our local music shop but we’re still waiting for those elusive winning balls.
What’s the best gig you have ever done and why?
There’s a couple that have been really special like Southsea Fest in 2014 where the place was so rammed we had friends dancing outside, our EP launch in March where most of our friends could get in and we had a good time. It was the first time we’d played every song we knew how to play and was fun to present ourselves like that for our first headline gig.
What’s the worst gig you have ever done and why?
I think everyone has that story where they’ve played to three people and I did when playing solo once but mine comes with a twist; those three were my dad, my uncle and my nan. They enjoyed it though and none of them walked out or went to the bar.
If you weren’t a musician what would you be?
Probably watching less Dinner Date and playing more Football Manager whilst doing something I didn’t want to at university. I only followed music by chance and now I can’t really imagine not making songs, if that isn’t too cheesy?
Do you have any information regarding upcoming releases, projects, DJ mixes or collaborations in the pipeline that you would like to tell us about?
We put out the Grip EP in March and Bruising in May as part of a t-Shirt/download code combo but we’re writing and recording loads at the moment, so we’ll have something special coming soon.
https://www.facebook.com/theboyiusedtobe
http://theboyiusedtobe.com