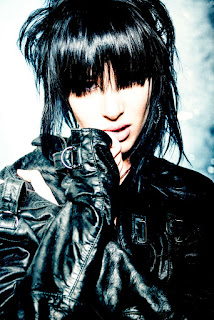 Fable is a 19 year old from the south coast of England who has a very promising future ahead of her. She is currently in the process of writing and recording her debut album with trip-hop collective Archive. And guess what…she has also co-written and featured on a song for the forthcoming new album by Orbital! Fable unveiled her new track ‘I am You’ this month which you can listen below and we were lucky enough to catch up with her here…
Hi there, how are you and what are you up to today?
Hello!! I’m still lying in bed dribbling over jam croissants and making disappointed faces at the rain. Nearly time for album hibernation, it’s all a bit too exciting.
To those not familiar with you, how would you describe your sound?
My opinion on this is always changing, the new single is all lazy beats and smashing pumpkins riffs but the music has many different sides. Songs like ‘stranger in my head’ off the last EP, Parasite, was more spacey cinematic electronica, the sound very much depends on what I’m trying to say in the song. Looking ahead to the new album get ready for some weird eastern riffs and driving synth panic attacks.
What are the 5 albums and artists that have influenced you the most?
Like most of us I’ve always had an unhealthy obsession with In Rainbows since it came out and fucking blew my mind,
Dummy portishead – cause I’m a 90s kid.
Björk’s a babe.
Kate Bush the melodic empress
Favourite album of all time?
Bowie’s The Man Who Sold The Word.
What other artists do you really like at the moment and why?
I have a bit of a love hate thing with everything everything at the moment something about their music does weird shit to my brain, but I kinda like it.
The Knife – One Hit, can’t get this song out of my head, pure menacing genius.
Sunday walks with Grimes on my headphones is always a win, gives me an opportunity to turn into a woodland creature once more.
What are some of the key pieces of gear you use to write your tracks?
Most of the time I’ll sit there on my Yamaha to gather the clues and find the song, I’m working with a lovely guy and producer called Paul Steel on the new album at his home studio just outside Brighton.
What’s the best gig you have ever done and why?
the best gig I’ve done to date was the Shepherds Bush Empire surpporting Archive, after recording the Parasite EP with them. it really helped us understand the music, when you have such a great audience and venue you hear your music in a different light.
What’s the worst gig you have ever done and why?
I was 15 trying to make some moneys playing these sadistic holiday parks in Devon and Cornwall, it was kinda like karaoke meets child care, always a right laugh if you’ve had enough booze, if not jog on. I remember this one kid, very fond of his inflatable ball so much he wasn’t sharing it with no one, instead just decking people in the face with this thing, tensions were growing on the dance floor, He finally chucks it on stage and I boot it back, it floors the kid and we’re all left in awkwardness. Never again.
If you weren’t a musician what would you be?
A majestic Dragonfly.
Do you have any information regarding upcoming releases, projects, DJ mixes or collaborations in the pipeline that you would like to tell us about?
The new single I Am You is going to be infesting people’s ears shortly, then the album early next year. I’ve got a track with the legend that is Paul Hartnoll from Orbital still to finish off (I did a track for him on his latest album, 8:58, so we’re playing around with some new ideas). Not sure where it’ll all fit in, but we’ll try and squeeze it on like a comfy slipper.
https://www.facebook.com/whoisfable