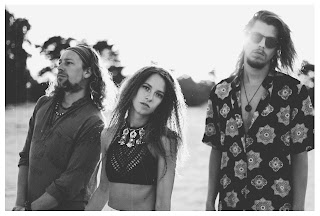 Holland’s very own merchants of all things voodoo, MY BABY, will head back to the UK this month for their first major headline tour of the country. Following on from April’s tour in support of Seasick Steve and appearances at Glastonbury and Great Escape, MY BABY’s relentless touring schedule continues.
Tipped to be the next big thing, MY BABY’s brand of psychedelic, blues ridden shamanic trance is nothing short of infectious. With 2016 looking to be an even bigger year than this I highly recommend getting down to see their mesmerising live show now as chances are you won’t get the chance to see them perform to venues this size for much longer!
MY BABY’s UK Tour dates:
27 Oct 2015    Komedia Brighton
28 Oct 2015    The Bodega Social Club Nottingham
29 Oct 2015    The Loft at Arts Club Liverpool
30 Oct 2015    King Tut’s Wah Wah Hut Glasgow
31 Oct 2015    The Greystones Sheffield
01 Nov 2015   The Deaf Institute Manchester
02 Nov 2015   O2 Academy Newcastle Upon Tyne
04 Nov 2015   O2 Academy 3 Birmingham
05 Nov 2015   The Louisiana Bristol
06 Nov 2015   Oslo Hackney London
http://www.mybabywashere.com