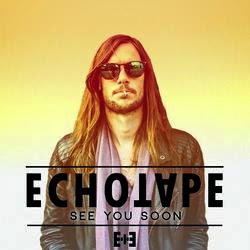 Echotape were formed in 2011 by a group of like-minded guys from the music scene in a small, off-the-map town in the South of England.

Living together in their own studio and flat, the boys set about getting their music heard from all corners of the globe. Their sense of adventure has seen the band perform from Hollywood to Holyhead, Moscow to Madrid. Feature in London’s Tate Gallery, having naked stage invasions in Dublin, and jamming onstage with Carl Barat of The Libertines.
With their fan base building they performed a sold-out London show and gained 100,000 plays within the first 4 weeks of release. This track was playlisted instore at River Island with BBC 6Music, BBC Radio 2 and global radio support.
Now, Echotape have just announced the release of ‘See You Soon’ on March 2nd 2015. The band will be touring again in support of the single with a UK and Ireland tour to be announced shortly and a busy summer ahead.
I caught up with them this week to see how they were getting on…
Hi there, how are you and what are you up to today?
Very good thanks. We’ve been doing some rehearsals today ready for a show tomorrow night in support or our new single ‘See You Soon’. We have also been sorting out details for our monthly club night we run in Andover. It’s never ever a dull day in our band flat.
To those not familiar with you, how would you describe your sound?
We refer to ourselves as indie-rock, bags of attitude and feel-good upbeat energy. Although actions speak louder than words so check out our stuff online and make your own decisions.
You mentioned you have a new single coming out “See You Soon” when will this be available for people to download and what’s it about?
‘See You Soon’ is our most ambitious song yet. It’s a big sing-a-long track. We were playing it all last summer on the festival circuit as the closer to the set and always got a great response. The crowds always join in and make it a special moment. It’s good to get it released and hopefully people will enjoy the recorded version as much as when it was played live.  It’s available to download on March 2nd 2015.
You seem to have a lot of gigs already lines up for 2015, where are you looking forward to playing the most and why?
You have to be kept busy! The Amersham arms show is the big single release party so will be a banger! We’re heading off to Ireland as part of the tour too and love it over there. They know how to have fun and always make us feel welcome. Lots of alcohol will be consumed I’m pretty sure!
You have over 100,000 plays on sound cloud for Whiskey Bar, what do you think is special about that song to make it so popular?
It’s a song about going out, having fun and just enjoying yourself, which everyone can relate to. As it’s an upbeat song with an impact straight away it keeps peoples attention, which is vitally important when you’re a new band and discovering your music for the first time. Our previous single ‘We Should Feel Like We Are In Love’ also had over 100,00 plays so maybe it’s the fact we can write good songs!
What are the 5 albums and artists that have influenced you the most?
There are so many artists out there that we love. All big Bruce Springsteen fans, The Libertines too, Depeche Mode are also a band that we admire. When writing songs though you generally tend to base it on everyday life so even a boring conversation on a phone or an argument with someone can influence you.
What other artists do you really like at the moment and why?
Edward Sharpe and the magnetic zeros is currently on repeat in our band flat. It’s emerged again after a few years in the wilderness with us. Always seems to be the way with great albums. You’ll love them then forget about them then fall in love all over again.
If you could collaborate with any artist dead or alive who would it be and why?
It would have to be George Harrison. He created some amazing music, both with the Beatles and solo recordings. Plus by all accounts he was an amazing man. Always believing in love and helping others.
What’s the best gig you have ever done and why?
Getting to play Moscow arena in front of 8,000 people was pretty special. The roar of walking out in front of that amount of people sent shivers down your neck and one that will stay with us for the rest of our days.
What’s the worst gig you have ever done and why?
These sorts of gigs are the ones you wipe from your memory! Unless you’re willing to pay for some counseling I’ll leave it at that!
If you weren’t a musician what would you be?
A drummer…(Coming from a drummer)
Don’t forget to follow these guys because they are definitely one to watch in 2015…
http://www.echotape.co.uk