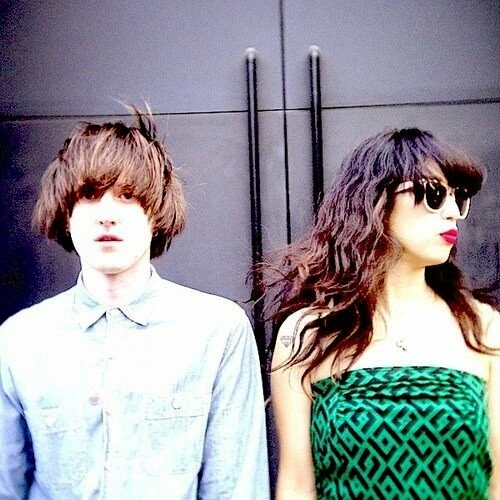 Parakeet’s bouncy brand of indie rock has been soundtrack-ing my summer since the release of the band’s new EP Pink Noise in June. Fronted by Mariko Doi and James Llewellyn Thomas (who you may have seen rocking out with their other projects, Yuck and The History of Apple Pie) the band have been flapping their musical wings far and wide, supporting Wavves, Palma Violets and DIIV on European tours to playing sell-out shows in Tokyo.

We caught up with Mariko (M) and James (J) from the band to find out a bit more about Parakeet, what makes the band tick and the Pink Noise EP.

Hi there, how are you and what are you up to today?


J: Hi, I’m good. Today I have to sign hundreds of pre-ordered The History of Apple Pie LPs. Mariko is home in Japan.


J: Mariko plays bass, guitar and sings. I play drums. Our sound has developed from our early (unreleased/unheard) fast punk/fuzz songs into something more melodic and poppy.

You’ve recently released an EP, Pink Noise. Can you tell us a bit about it – musically and inspiration-wise?


M: I like being alone at home when I write songs with my personal things around me. I write journals and I have certain words or sentences in my notebooks. They could be things I saw, particular feelings and words I like. The phrase ‘pink noise’ stuck in my mind when I was recording with Yuck in New York. Chris Coady, the producer, used pink noise to test the gear and it had this numbing effect on me. I was picturing myself falling into this pink noise world as if I’m falling into a dream.
The song ‘Paper Town’ is about my childhood where my brother and I used to play. I have moved on and grown old like everyone else but some people can only live in memory.  I didn’t want to leave this precious memory to rust. I guess I finally found the way to keep it. This song is also a milestone musically because it’s the first song I started writing on guitar. I have this passion again for guitar playing which I haven’t had since my early teenage years.

I feel proud of how this EP turned out. It’s full of those feelings of getting lost in thoughts. I hope people can pick up on that.

Parakeet have released a limited edition cassette tape version of the EP. Vinyl has had a massive resurgence in the past few years, do you think tape can follow that trend?

M: Well for us it was just a much cheaper war to release our music, and if a free download comes with the tape release I think it’s a good way to do it. And what with Cassette Store Day coming up I think it’s definitely a popular medium. I love cassette releases.

What are the 5 albums and artists that have influenced you the most?

What other artists do you really like at the moment and why?


J: We really like Ought. Their album is probably my favourite this year so far. We saw them play in London recently and they were really great.

What’s the best gig you have ever done and why?


J: Supporting Wavves was fun and we toured with DIIV which was cool. Touring Japan last year was amazing. We just switched round the live set-up so now Mariko is playing guitar instead of bass and we’ve gotten Max from Yuck on bass and Jack from Polterghost on guitar too. We played our first gig with this line-up recently at White Hear and I’d say it’s the best we’ve ever sounded.

What’s the worst gig you have ever done and why?


J: The worst one was in Paris on the DIIV tour. The venue had the most ridiculous decibel limit and during our set we knew people couldn’t hear a thing we were playing, it was totally farcical. Watching DIIV after was absurd; they put on a pretty energetic show and you could see them flailing about the stage, but all you could hear were people talking.

If you weren’t a musician what would you be?

What are some of the key pieces of gear you use to write your tracks?


J: Mariko uses a cheap Fender Mustang with a Tube Screamer [guitar overdrive pedal] through a Fender Princeton amp. The sound she gets from that inspires her to write songs in a certain way.

What would Parakeet the band’s ideal pet be?

You both play in other bands (Mariko in Yuck and James in The History of Apple Pie). Is it hard balancing your time/creative energies between Parakeet and your other projects?


M: It’s always hard to find time to do Parakeet. Yuck released a second album early this year which involved recording, rehearsing and going on tour.

On the other hand, as a writer in Parakeet, playing music in Yuck and going on tour helped me in terms of inspiration a lot. It’s a very unique life and makes me perceive things differently. Being on the road is like leading another life. In a way, I’m freer being in two bands.

Parakeet are currently recording their first LP for release in 2015. If you can’t wait till then to check them out, see them supporting Yuck at The Lexington, Islington on Sunday 19th October.