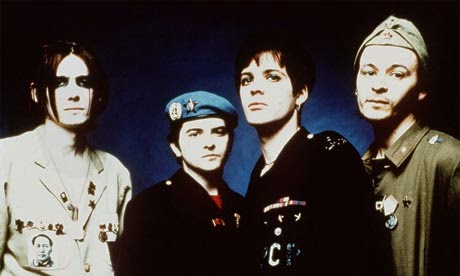 Welsh rockers Manic Street Preachers have announced that they will be playing a set of shows to celebrate the 20thanniversary of the release of their third album The Holy Bible. Playing gigs in Glasgow, Manchester, Dublin and London in December, the shows will see the band perform The Holy Bible in full.

As well as getting used to playing tracks from the album live again, bassist Nicky Wire has stated that the band are also having to prepare for the shows emotionally, saying “That album was always about something more, so we’ve got to get that in our psyche.” The Holy Bible was written and recorded at a significant phase in the history of the Manics. At the time, rhythm guitarist and lyricist Richey Edwards was battling depression, alcohol abuse, self-harm and anorexia whilst the album was the last release before his infamous disappearance towards the beginning of 1995.

The tour will therefore be a bittersweet one for the band – celebrating an album acclaimed as one of the best musical products of the decade, whilst also remembering the darkest period of the band’s past.
Tickets go on sale at 9am Friday September 26thfor the following dates:
8th December                                  Glasgow Barrowland


Here’s the video for ‘Faster’ from The Holy Bible: